How to Write a Fully Developed Composition

Getting kids to write a story is a challenge, especially those who do not have a great reading habit. It’s tough to come up with interesting story ideas, and even if they do, they often do not know how to DEVELOP these ideas.

And developing a story is crucial to scoring higher marks for Content, in school composition writing. Take a look at the marking rubrics below: 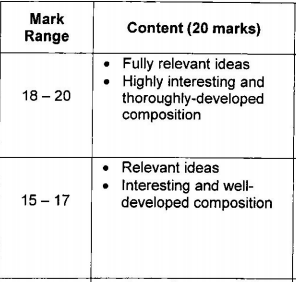 In order to score the highest band for content (upon 20 marks), you will have to write a ‘Highly interesting and thoroughly-developed composition’.

Let’s begin with what makes a GOOD story.

All stories, whether they are blockbuster movies, popular books or even cartoons, follow a similar structure, that has been tried and tested since the beginning of … well when people started telling stories!

Bear in mind, young writers, that in a Continuous Writing Exam in the Upper Primary, you will have BARELY 55 minutes to complete your story! (I always advise my students to set aside 15 minutes for Part 1, and 55 minutes – at least – for Part 2)

So ask yourself this question…which parts of the story should you focus on MOST? You’re right…definitely NOT the introduction. All you need for the Exposition/Introduction is to do character introductions, who’s who, how they interact with each other, any background information and introduce the setting, the where and when of the story.

So then, here are some pointers on how to DEVELOP your story fully, and make it INTERESTING, so you can score a higher content mark.

Every story needs a conflict, a problem to solve. No problem, NO STORY. Think of every movie you’ve watched, every book you’ve read. There is always conflict. That’s what makes readers want to read more! They want to find out how your protagonist (main character) solves these problems and what happens to him/her. Would you want to read or watch a story that NOTHING happens? Something needs to happen, and introducing a problem usually does the trick.

In the new PSLE format for Paper 1 Part 2 Continuous Writing (3 pics 1 theme), the 3 pictures are provided to help you think about the topic/theme. Your composition should be based on one or more of these pictures. You do NOT need to use ALL the pictures.

Those stories with no conflict/problem to resolve, usually end up very under-developed, not to mention BORING. Feedback from PSLE markers for the 2015 theme ‘A Considerate Act’ was that most of the students wrote about giving up their seat on a bus/train for an elderly person/pregnant lady. SNORE.

Think of a way to introduce a problem for your main character to solve! For the 2015 PSLE Paper 1 question the pictures were something like this: 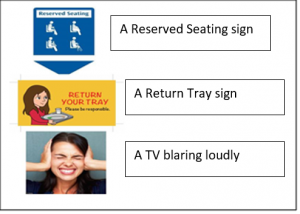 Examples of conflict/problems that can develop into a good story:

Don’t make life easy for your main character. Once you’ve figured out the problem for the story, make things get WORSE before they get better!

For example, the story may be about being bullied. Develop the story (rule of 3s) by including 3 escalating incidents where the bully made your main character’s life miserable, before you find a way (climax) to stop him.

Or it could be a competition/sports event story, where the main character faces tougher and tougher obstacles, until he finally triumphs. Trust me, readers dig this kind of stories. And why not, since such structures have been around forever!

Think about classical structures. In Campbell’s famous analysis of story archetypes, he typically identifies (1) the Invitation – where the hero is asked to take on the challenge, (2) the Refusal – the hero says no, (3) the Acceptance – something happens to change the hero’s mind, (4) the Adventure – the hero seeks to master the challenge (5) the Failure – everything comes to a head and it seems like the hero has failed, then (6) the Triumph – just when it all seems too late, the hero pulls off a magnificent triumph. You can’t beat 2000 years of storytelling tradition!

This is a major problem with young writers. Put it down to lack of life experience or exposure, but students, when writing compositions, tend to ‘outsource’ their problem-solving. Being bullied? Call teacher! There’s a fire? Call the SCDF! A thief? Call the police!

Yes, those are realistic reactions, IN REAL LIFE. But we’re talking fiction here. True, it STILL has to be realistic, and achievable. Your protagonist cannot turn into a superhero mid-story, no matter how badly you want to write that.

What essentially happens to a story, when you ‘outsource’ problem-solving, is that you have effectively cut away the climax of your story! Don’t waste this opportunity to write a thrilling, arm-rest gripping, heart-pounding climax to your story!

Your main character should always be the centre of attention in your story. Make him solve the problem, give him some help if he needs it, but ultimately, he/she HAS to resolve the conflict. Let the firemen, policemen and adults clear it up in the Falling Action of the story. That’s where they belong!

4. Rolling in the Deep

Stories can have multiple levels of meaning. They can have the surface, literal level (most young writers tend to write this way), and a subtler, deeper level that may only be understood by more mature readers.

For instance, one of my students was tasked to write a story about ‘Making A Choice’. She chose a picture of a gift. In her story, she wrote about the literal level of choice (choosing a gift for an estranged sister), and at the end of the story, there was also another choice (the choice of forgiving an estranged sister).

Another student wrote about ‘A Good Deed’, and in his story, he not only wrote about doing a good deed (returning a wallet), but also about paying it forward, how this good deed led to his mother, who was ill, being taken care of by the person whose wallet he returned (who happened to be a doctor).

This may apply only to more advanced writers, but it’s a great way to make your story a lot more developed and interesting!

Inexperienced writers have a habit of writing from a very narrow point of view, from only the main character’s eyes, as if everyone and everything else around them is static and non-responsive. They forget that the world they are writing about should be alive, thriving and INTERACTING.

I always tell my students, to BE there IN the character’s shoes, to feel every sensory stimulus, to interact with the surroundings, people, environment, and to make their world come alive.

6. Hocus Pocus! You Have to Focus!

A lot of young writers, even good ones, make the mistake of not knowing which part of the story to focus on writing. They forget that it’s a TIMED EXAM. They forget that they do NOT have the time to write a ‘Harry Potter and the Philosopher’s Stone’-worthy story. Hence, they write EXTREMELY long expositions/introductions, sometimes taking up more than TWO pages, before arriving at the conflict, which leaves them VERY little time to DEVELOP their climax, where the problem is resolved. Their story ends up extremely lopsided, with a lengthy exposition that does little for the story, and a hurriedly written climax, which leaves out too much details, thus leaving the story under-developed and sorry to say, BORING.

The trick is to write enough of an exposition just to introduce your characters, tell your audience about where the story is set, and if needed, insert props, set the stage, foreshadow, but DO NOT waste the intro on frivolous, inconsequential dialogue and details. Some kids don’t know WHAT to write, or aren’t sure how to develop their story, so they ramble on and on until they run out of time to write the best parts of the story!

So these are just SOME examples of how students writing for exams can write MORE developed stories. The majority of students will pretty much write run-of-the-mill, basic stories that are predictable and not very interesting. You need to remember that PSLE markers have to mark their way through hundreds of scripts over 4 days of marking, 10am to 5pm. The kids all write about roughly the same thing, since the theme is fixed.