3. Relative Pronouns Who, Whose, Whom

These three pronouns are often used as distractors for grammar MCQ, usually to test the use of ‘whom’, which many students are unfamiliar with.

These Relative Pronouns are used to introduce relative clauses. 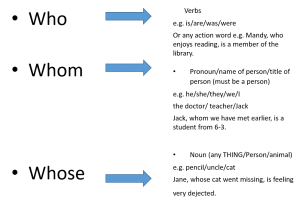 ‘Who’ is always followed by a verb/action

‘Whose’ is a possessive pronoun and refers to ownership. It is always followed by a noun,

e.g. John, whose cat ate his ice-cream, is very sad.

‘Whom’ is always followed by a human being

e.g. John, whom Jack saw at the supermarket, loves ice-cream.

e.g. John, whom the doctor treated yesterday, ate too much ice-cream

So check the word that comes after the blank, and you will easily find out which is the correct relative pronoun!

Which do you think is the correct answer?